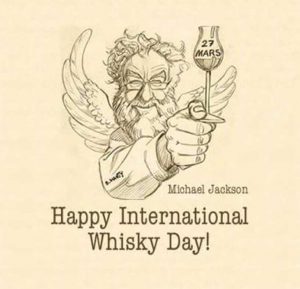 As I write this, today (March 27th) is International Whisk(e)y Day, a day where we raise a glass to one of the true heroes of Whisky and Beer, the late Michael Jackson. Through his books, Michael probably helped get more people into whisky than anyone else and I often look back on some of the early versions of the Malt Whisky Companion and reflect on how different the industry was back then, with much more focus on the whisky itself rather than glitz and glamour of some more recent releases.

I had the pleasure to meet Michael several times and, in fact, the first whisky event that I ever had anything to do with was with Michael at The Craigellachie Hotel.  It was May 1999, I was 19 years old and working behind the Quaich Bar at the Hotel. It was part of the first ever Spirit of Speyside Whisky festival and there was a convivial evening developing with around 50 people in attendance. Ed Dodson, then distillery manager at Glen Moray, hosted a tasting of Glen Moray, Glenmorangie and Ardbeg and then I remember Robin Laing sang some of his songs before dinner. Post dinner there was a question and answer session with myself and Michael Jackson.

I was somewhat out of my league.

I can’t remember much about the questions we were asked but I do recall, on several occasions after I had contrived some sort of answer based on what, relatively, little I knew, Michael responding “Yes Mark…. That’s one way of looking at it!”

Whenever you are reading this, make sure you raise a glass for Michael and everything he did for the industry and remember, for the future, that International Whisky Day will always be the true Whisky Day.